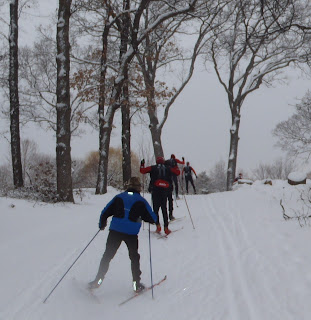 The unofficial NIN Non-race Race at Arrowhead drew about 20 skiers to the snowy trail at Arrowhead Golf Club on Sunday. The new snow, about 2 inches plus) was on top of the trailm which was not regroomed. Still, it wasn't bad to ski on and through as we plowed ahead.Everyone had fun while busting their lungs a bit in what officially was an 8.6K. No times were kept. The top five (all I know for sure) were Mike Choate, David Fyhrie, John Chadwick, Robert Nadler and Kevin Flowers. If I hear how more people did, I'll update. Thanks to Kevin for having the idea to have this non-race race after we were told we could not have the official NIN this weekend.
Posted by Bob Richards at 2:16 PM 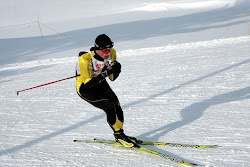